A warehouse made into apartment 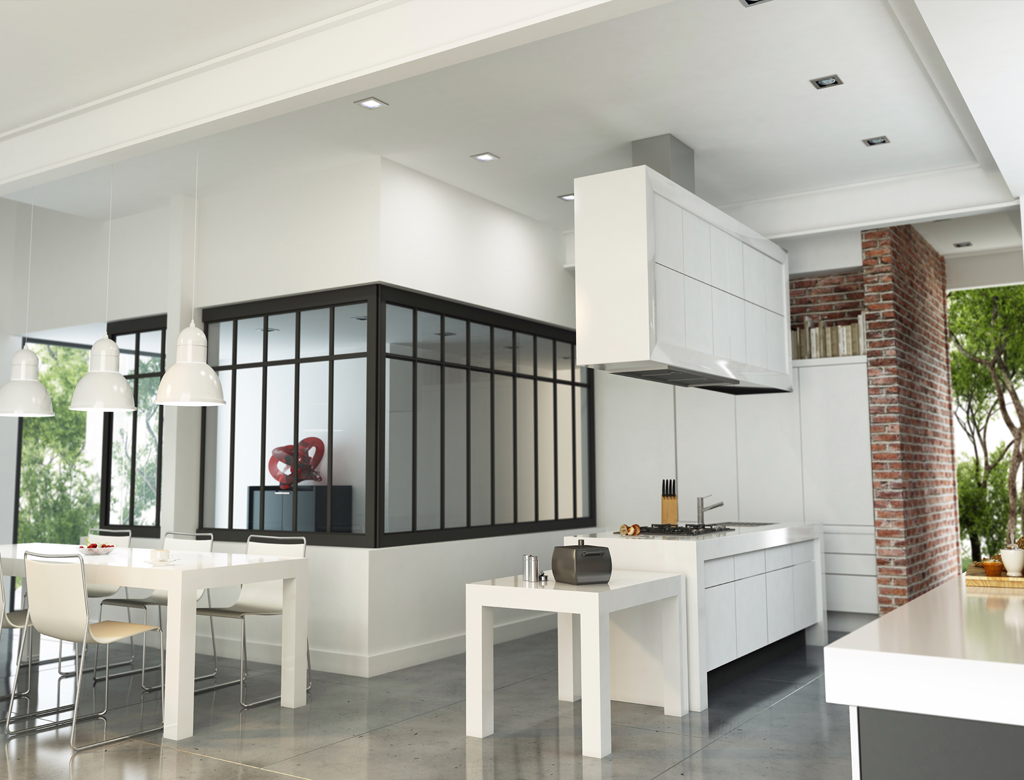 There is no single rule for finishing a kitchen. It can be done in a very classic way, as shown in the photo on the right, but you can also sneak in only some elements just smoothly referring to the loft style, e.g. black window frames with muntins and a piece of a brick wall. White furniture with straight lines complete the whole look. 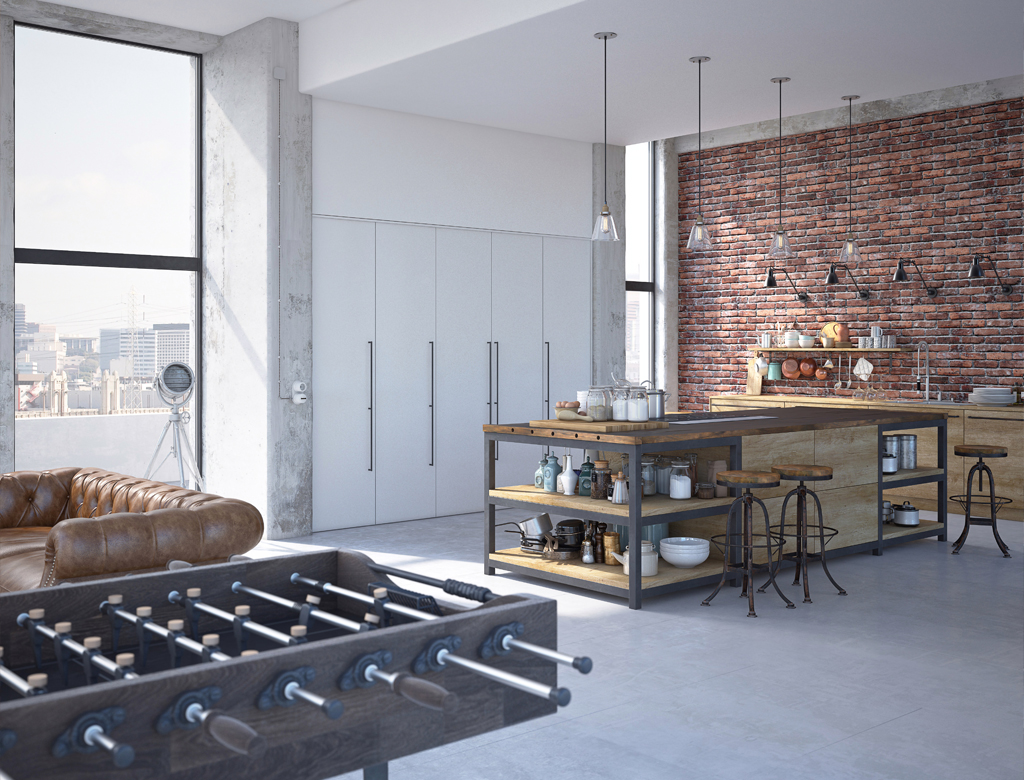 Here we have everything that defines this style: brick and concrete walls, grey-cement floors, wooden furniture with black finishes and a spacious, bright room with large windows in black steel frames. For this simple lighting with metal and glass lampshades. 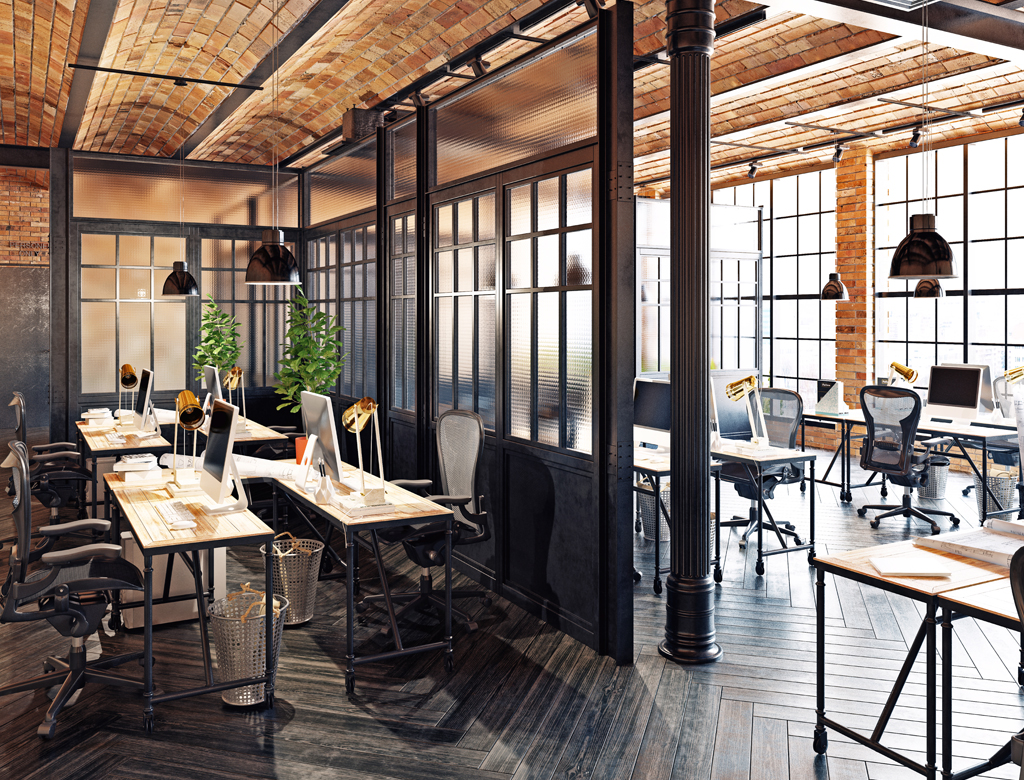 Here is, how you can use industrial style in an interesting way by transforming a warehouse into offices. The unusual finish of the ceiling in the form of semicircular brick recesses, a wooden plank on the floor instead of concrete, and metal pillars from an old street lamp draw attention. A glass partition with muntin bars also seems to be a good idea. 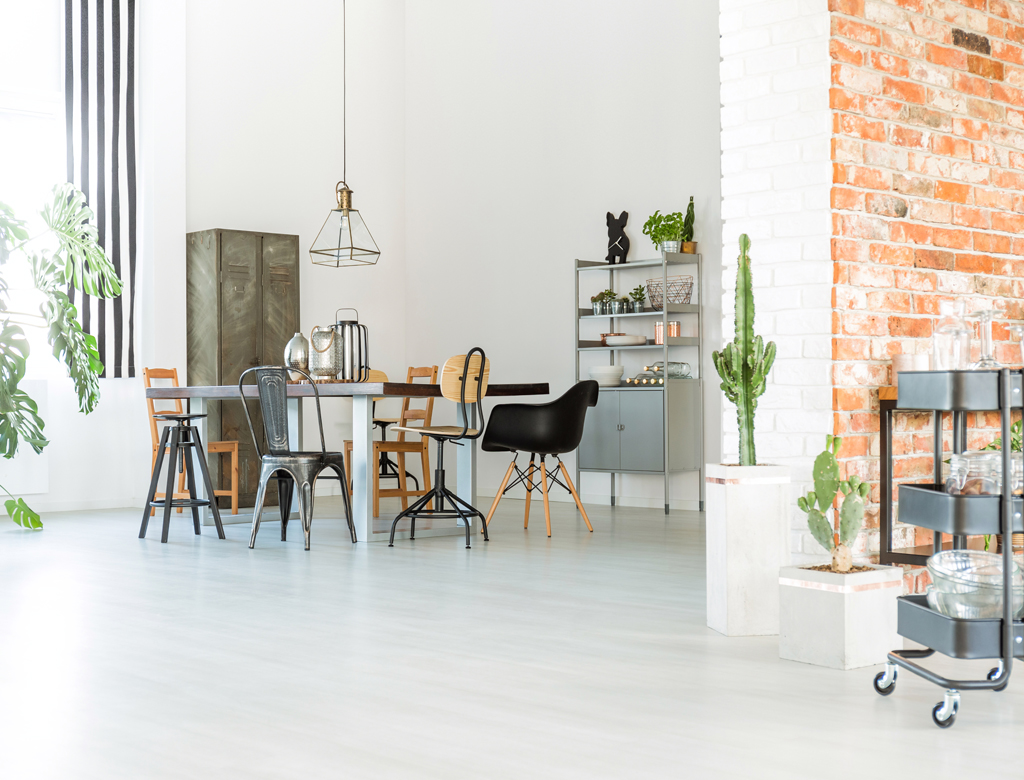 First of all, it should be spacious and separated from the kitchen area by, for example, a brick wall. Minimalistic furnishings should help to avoid a cluttered effect. For this Microcement floor, preferably light grey will suit perfectly as well as other industrial accessories: a lamp, unusual chairs, gadgets and window curtains. 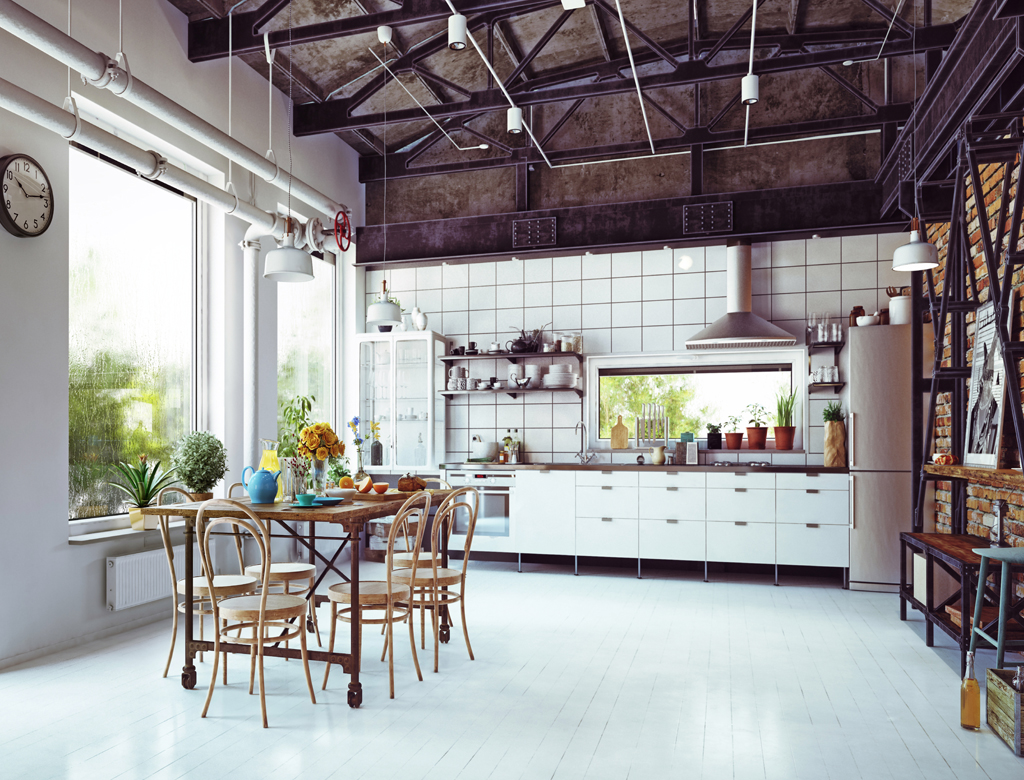 Here we have everything what is typical for industrial style: high interior, thick industrial pipes with valves, bright and spacious place, brick wall. The ceiling structure based on steel trusses, which perfectly matches the industrial theme, additionally attracts attention. The only difference is the white tiled kitchen wall and the lack of typical industrial windows with muntin bars. 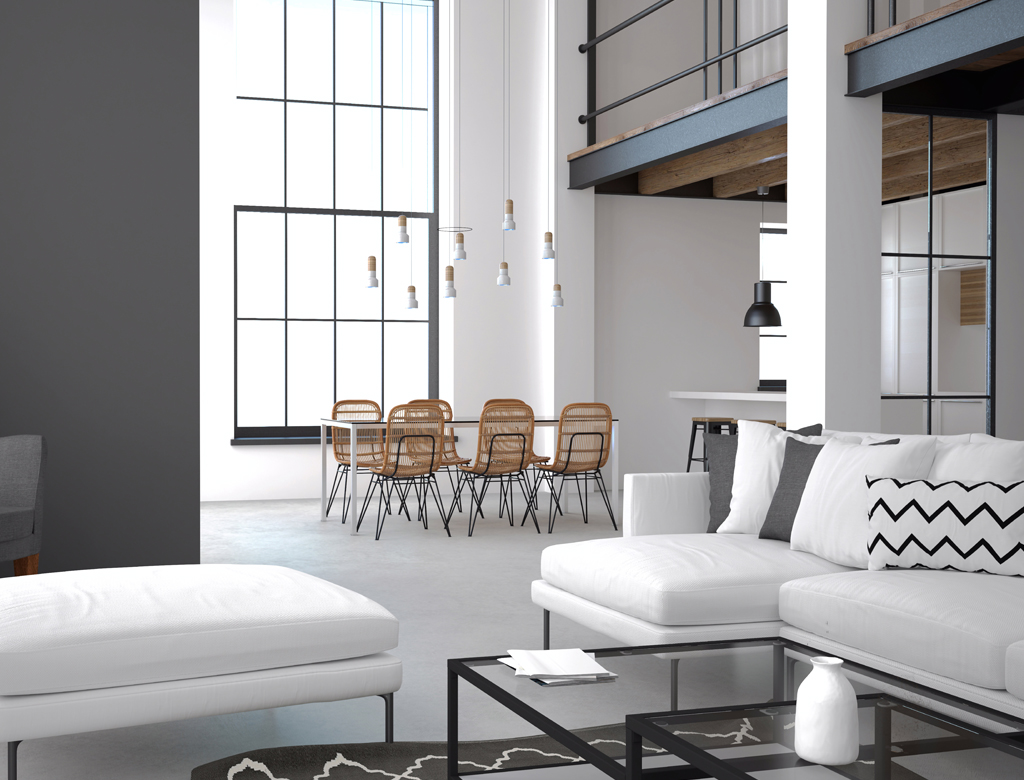 Surely it can be finished in an industrial style. In this case, we have only some of its elements smuggled in, which, however, determine the industrial style look of the entire room: large windows with muntin bars, a table and a glass wall, as well as banisters on the mezzanine level. Everything is kept in the industrial colours of white, black and grey. 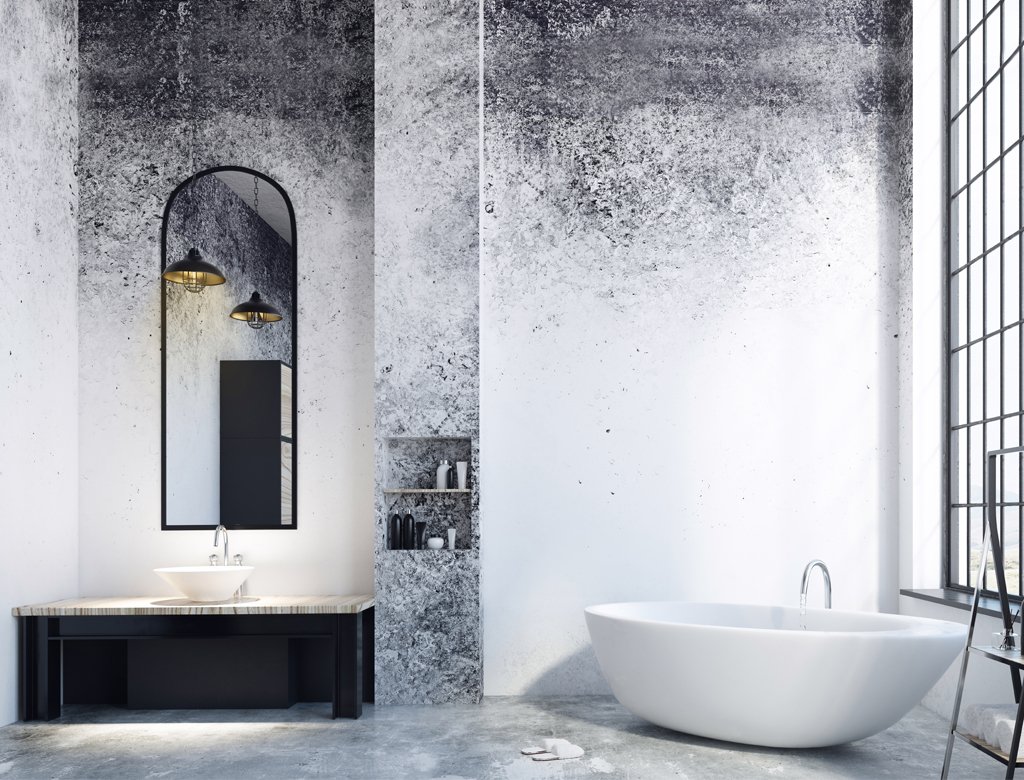 Usually it is finished in light, muted colours. Walls and floors are usually lined with industrial concrete, and black electrical cables and thick air conditioning and ventilation pipes run through the ceiling. A bathtub is often free-standing next to a large window with muntins. To emphasize the style, it is good to mount a mirror in a black frame.

With modern lifestyle trends referencing the joys of bucolic bliss, it comes as no surprise that we’ve noticed an uptick in industrial style client requests over the past few seasons – and for good reason.

Industrial style decor marries sleek modernity and old world charm with an organic, lived in feel to create the perfect play of contrasts. But what does industrial style interior design really mean? And when it comes to designing industrial style homes, how do you make the look work for you without it coming off as a heavy handed theme?

When people think of industrial style, they often associate it with lofts boasting oversized black metal windows, raw unfinished wood, and exposed bricks. And to the contrary, this design styles is not only applicable to urban environments. So what makes industrial style interior design seem so viable for today and how do you pull it off with confidence?

What does industrial style mean?

Industrial style refers to frill and fuss-free no-nonsense decor that takes inspiration from the lofty look of warehouses, factories, and other industrial structures. Industrial style decor comprises of stripped back architectural details including the use of bare bricks, metals, and wood, as well as salvaged and recycled materials. Industrial style furnishings are usually hardwearing and often obtained from reclaimed yards. The best benefit in creating industrial style homes is that you’ll have the opportunity to customize the look using furniture and decor that are completely unique to your home.

When planning an industrial style living room, keep comfort king although everything should be trimmed of excess for a minimal take. Opt for furnishings that have a simple design wild solid upholstery in natural textures and neutral colours.

Why you will love industrial style interior design?

How and when industrial style began?

While little is known about the origin of industrial style interiors, it’s widely assumed that the style developed during the early 20th century. Buildings comprised of brick, concrete, iron, and steel designed to last for years. These large, uncluttered spaces were focused on fitting more personnel to accomplish more work. At the end of the 2nd industrial revolution, the trend towards globalization become more apparent. Scores of key factories shuttered and moved their operations to other countries, and as a result, vacant industrial buildings suffered from neglect. Which in turn left behind an endless resource of high-quality materials to take advantage of.

And as cities have become increasingly populated once again since the early 90’s, resulting in a shortage of residential buildings, it become a logical solution to transform industrial areas into residential neighborhoods via gentrification.

Instead of concealing the untouched beauty of industrial buildings, savvy architects and homeowners were the first in converting industrial style plans in an ongoing trend celebrating bare walls, architectural details, and the mechanisms of the building’s origins.

Important tips for the industrial style

To summerize: many people do not fully understand the essence of the industrial style and minimize its look to a large room, the wall of bricks and large windows with muntin bars. Skipping the other things such as colours, accessories, interior design or the way it is finished means that instead of a cool, industrial face we only get a strongly deformed substitute, an illusion of a real industrial style.

Remember that interior design in a loft style takes many forms, and the beauty of its implementation lies in the good taste of the owner, the knowledge of the designer and last, but not least the right choice of a finishing company.

By continuing to use the site, you agree to the use of cookies. more information